Homepage>Grading in SSC: end to mad race for ranks.....Source: The Hindu

Grading in SSC: end to mad race for ranks.....Source: The Hindu 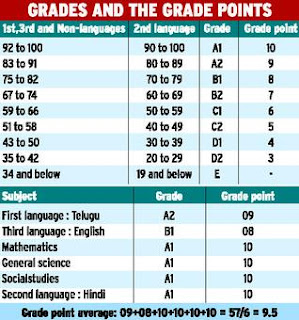 There will be different parameters of judgement for the second language while all other subjects will be graded on a different scale (See table). 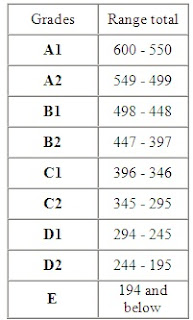 The decision to adopt absolute grading system was taken on the directions of the High Court recently. In fact, the Government decided to adopt grading system in the year 2005 and a committee was constituted to introduce grading system and also reduce question papers.
The report was submitted n 2006 and orders were issued for implementation of grading system from classes one to seven for 2007 and 2008 years.
Later, in 2009 orders were issued to adopt the same for SSC public exams and follow the CBSE pattern.
Accordingly, Relative Grading System was introduced in 2010 and pass certificates were issued on a nine point relative grading system. Based on CBSE reforms, the Government further decided to adopt Absolute Grading System and orders were issued in May 2011. The SSC results of 2011, however, were released with Absolute Grading System but it also indicated the marks.
Later, some writ petitions were filed in the HC seeking the Government to give only grades and not marks. The HC in its directions on May 16, 2012 asked the Government to announce results only through grading system.
The advantage of grades, the Government feels, will reduce burden and stress on students as there would be no race for higher marks and ranks. It will also eliminate unhealthy competition among the top achievers and reduce societal pressure. It will also address the problem of subjectivity in valuation of answer scripts.
Academics point out that when the intellect of students scoring 92 and 98 will be the same, there was a need to put them in the same bracket. Marks depends on various factors and don't generally determine the students intelligence. These issues were discussed at the national level and even the National Curriculum Framework has strongly recommended it.
Back

Photo used under Creative Commons from VinothChandar  © 2011 All rights reserved.

This website was built with Webnode
You can also have an impressive website for free!
Try it out